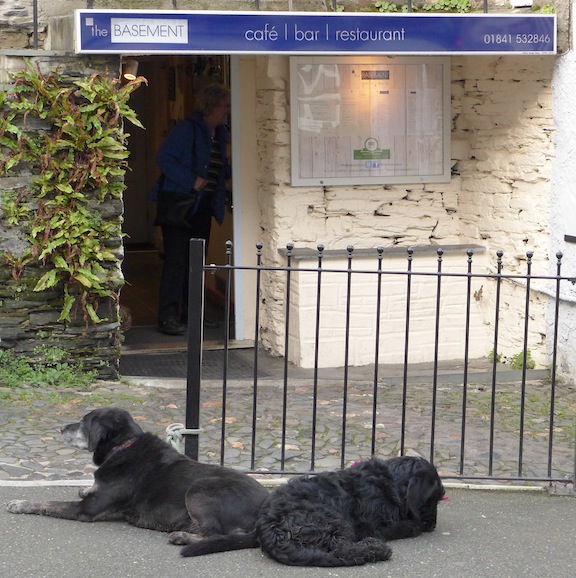 Posted at 14:40h in Shopping and Supping, Supping by jonathan futrell
0 Likes

With so many headline chefs working in Padstow it’s easy to overlook those places that, without the hoopla and the subsequent scarcity of tables, just get on with delivering good food, in relaxed surroundings, at sensible prices. The Basement is such a restaurant, beneath some touristy clothes shops, and also outside in a covered, gas heated terrace, on The Drang, a cobblestoned ginnel linking Padstow’s harbour with Market Square.

It was winter and a bit windy outside; any other day it’s a great spot for lunch and people watching. Whereas inside the low ceiling, modern dining room with an open kitchen on one wall, was chatty and relaxed. A single diner read from a tablet, and a romantic couple whispered.

Call it intuition but my friends and I knew the food was going to be good when we saw the size of the dinner menu; just seven starters, eight main courses and five desserts. In my experience the shorter the menu the better the food for the simple reason that the ingredients are always fresh and the chefs have cooked each dish so many times they can’t fail.

We started by sharing a couple of portions of Porthilly mussels (from across the river). Perhaps smaller than some, but served with a creamy sauce mildly spiced with red chillies and onions. One couple among us took advantage of the winter special for two, a brace of sirloin steaks, rough cut chips the size of an ogres thumbs and a bottle of house red. Another opted for the pork belly served with a piece of crackling as long as a ruler and with more crunch than a brandy-snap.

My friend and I went for the filets of gilt head bream with pak choi and potatoes. The snow white flesh was firm and flavoursome, the pak choi nicely al dente, and the whole thing really kicked off with a glass of Chateau Civrac, an unusually fat sauvignon blanc from Bordeaux. Fish suppers don’t get any better.

For dessert it was a toss up between the espresso brulee and the west country cheese course. I opted for the latter. Big enough for three with each cheese at its peak for texture and taste.