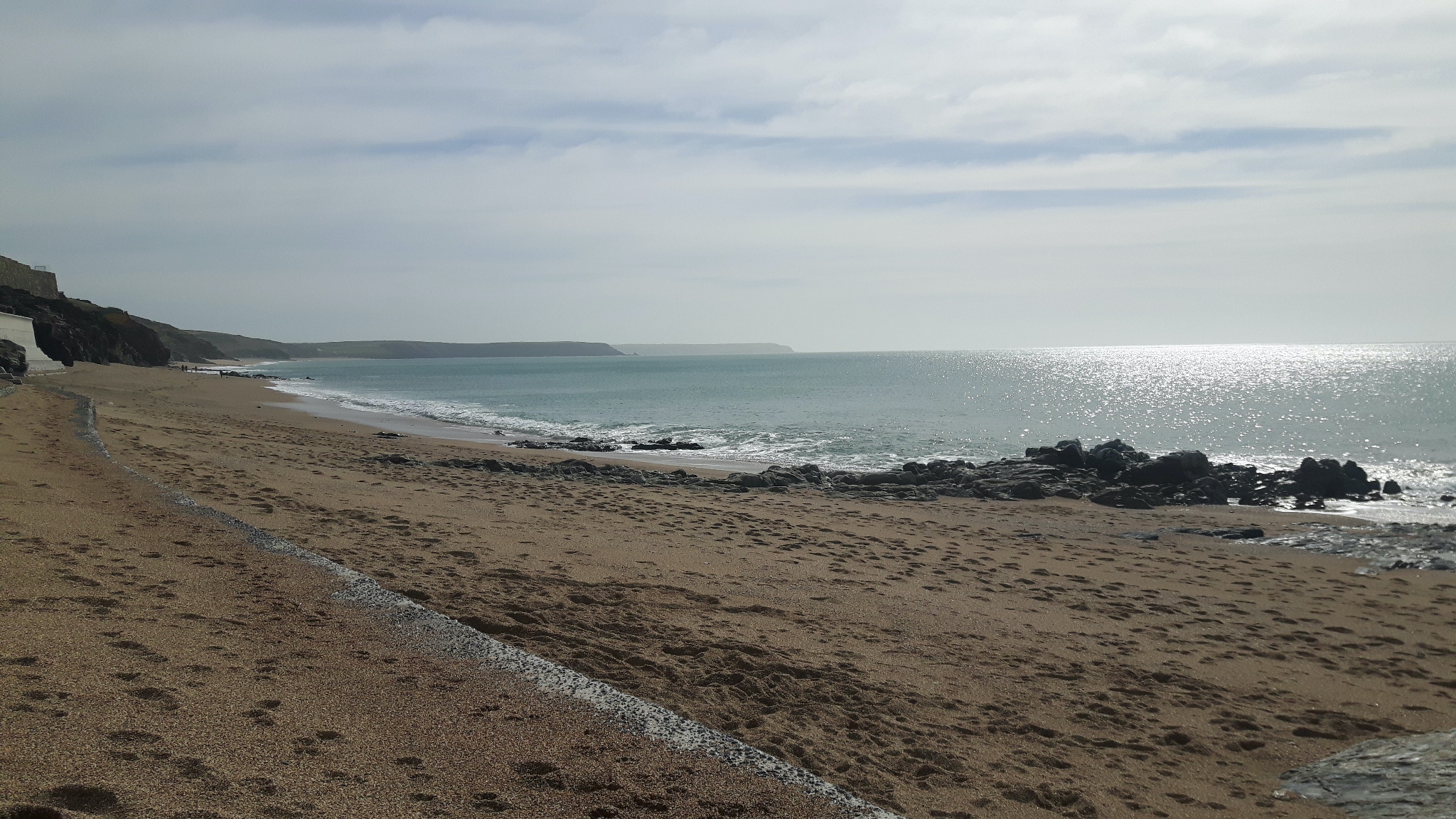 21 Mar A calm and very lovely day in Porthleven

Posted at 14:03h in Seeing and Doing, Uncategorised by jonathan futrell
0 Likes

Even if you haven’t been there the chances are that you will already be familiar with the quay and clocktower overlooking the vertiginous harbour at Porthleven, a fishing port and resort on the south west facing side of The Lizard. The reason you’ll know it is that almost every time a major storm rolls in from the south west, giving weather readers a bout of the superlatives, the BBC’s Spotlight South West shows the same white knuckle images of mountainous waves slamming into Porthleven’s 30 foot sea defences and  clocktower. 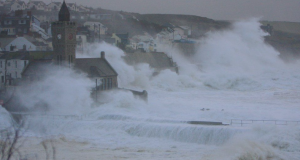 before…with thanks to the BBC 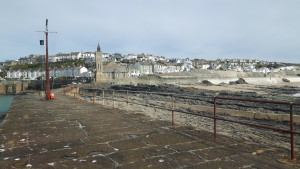 We’ve only been ensconced in Cornwall for 28 years and yet in all that time have managed to avoid Porthleven. With lockdown incarcerationosis at fever pitch Kim and Asta and I decided to make use of the first spring-like day of the year and pay a visit to the town we’ve heard so much about on the weather reports.

Driving west and crossing the county there is a beguiling remoteness about The Lizard that makes it feel that little has changed despite decades of celebrity chefs and surfing led tourism. Narrow switchback lanes, livestock and pheasants and a sense that you’ve left the other world behind.  Even the busy town of Helston just two miles away, with its out-of-town stores, appears to be operating at half speed. The quirky small world-ness of the place hit home during a conversation with gentleman with Einstein hair in the harbour car park. He’d lived in Padstow, where he’d met his wife, and worked at the long since closed Midland Bank. He said he knew Dennis Road where we live and had had lodgings in a big house at the far end of the road on the corner with Sarah’s Lane. In other words the first person I spoke with in Porthleven had lived in our Red House. He denied being responsible for any of the name engravings on two of our slate windowsills.

For some time unable to grasp what we’d just heard we followed the harbour road to the left, passing a terrace of handsome blue and white stucco Victorian homes on a rise, and the storm battered Clocktower towards the narrow Porthleven Pier. A signs warns pedestrians away from the pier when the red ball that hangs from a mast at the other end is raised. On the far side of the harbour is the Old Lifeboat Station with a mural of former lifeboat crews in their sou’westers on the door above the slipway. I subsequently learnt it is owned by the businessman who bought my mother’s home in Twickenham. That’s one too many coincidences. I needed a drink. But this is lockdown when the only medicine is fresh air. 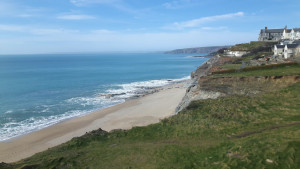 Penzance through a haze in the distance

Turning the corner the sheer scale and grandeur of the beach opens up, stretching almost in a straight line for a couple of miles and terminating at Gunwalloe and the nearby village of Berepper. Walking on it is hard going though with its microscopic millennium storm worn pebbles instead of sand. Asta was struggling too so after a short distance we climbed the steps cut into the towering beach defences and continued our walk above the beach along Loe Bar Road. Heading east we entered National Trust land with well marked trails along and above the cliffs. If you’re up to it there are splendid walks from there, including one along the banks of a lake called The Loe a mile or so inland along a verdant valley to a park and pond on the southern fringes of Helston.

From up here there is a hazy view to Penzance and Newlyn, St.Michael’s Mount hidden by the peninsula at Prussia Cove. Overhead the silence is broken every few minutes by a helicopter on manoeuvres from RAF Culdrose. Porthleven’s most famous son is Wing Commander Guy Penrose Gibson VC, DSO&Bar, DFC&Bar, commander of the Dam Busters raid on the Ruhr in Germany in 1943. 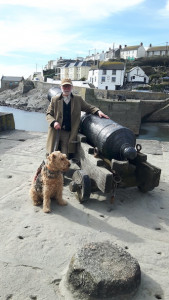 Circling back to the quay passing the Nauti But Ice ice-cream parlour we joined some bikers at harbour-side tables serving a coffee and snacks trailer parked there. One of them wore a leather jacket bearing a T.W.A.T. insignia; two wheels and that.

Friends tell us Porthleven (translated from Cornish meaning smooth level harbour) can get busy in the summer. There is a food festival that Prince Charles famously attended and almost all the cottages above the beach bore holiday rental signs, with plenty of construction work underway on what I expect will be others. A fact not lost upon the young friend of the girl making our coffee. He said they’d like to buy a home there but with prices rising they couldn’t see how. For the time being he’d be happy when lockdown ends and the restaurants open.

“I want to eat out again more than anything else.”

I’m with him on that, and when I do I’ll be taking the tip from the man who used to live at The Red House and pull up a chair at The Square. The best in town he’d insisted.